Before we were told to color between the lines, what did our art look like? I remember kindergarten and I got the tough teacher — was it Mrs. Timmons? When I told friends that morning at Trinity School which room I was in, they sighed shaking their heads relieved they hadn’t wound up in there. She assigned what felt like piles of homework that first week while the rest of my friends with easier teachers got to play outside until bedtime. The piles amounted to scribbling a picture of our family on a sheet of paper or determining a food we liked and getting our mom to help us write down its word, but still, it was homework.

Mornings we sat at rectangular tables with rounded corners coloring, with fresh crayons and beige ruled paper in the middle. Mrs. Timmons walked around the room, peering over our shoulders and inspecting our progress. As she circled the room, she reminded us to color between the lines, a simple methodic instruction that stuck, such that I never considered there could be another way.

She reminded us to color between the lines, a simple methodic instruction that stuck.

Self-expression made me nervous. I chose Halloween costumes from Elmore’s already boxed up and figured out, or I went as a ghost (simple sheet with cut outs), a witch (black cape, pointy hat, creepy mask) or cat (drawn on whiskers, headband with ears, black leotard and pinned on tail). I could qualify as a trick or treater eligible for as much candy as the next kid, but I didn’t have to build my character from scratch, hoping people “got” my costume. Because, horror of all horrors, what if they didn’t? I wanted to sail along house to house unnoticed, filling my pumpkin pail with Three Musketeers and Milky Ways. The goal was candy, the costume the ticket. All the attention on whether I measured up could ruin the fun and was an unnecessary distraction for the evening I’d anticipated all year. Looking back, I’m fairly certain I was the only one measuring me.

Growing up, one of my good friends lived in-town near Peachtree Street, and on weekends I’d spend the night there and we’d sleep in, hanging out upstairs in her sunny bedroom. Her brothers often brought in their hamsters and we’d play with them and let them run loose, and they’d eventually wander off where no one could find them. They’d always turn up, though, and I know this only because I would ask.

Later, we’d make cookies, and if they happened to be out of chocolate chips, it would be sugar. Flour and crumbs dusted the counters and floors of their large sunny kitchen and, unlike at my house, no one seemed to notice. There was nothing wrong. Colorful art hung on the walls and leggy plants spilled over sunlit window sills. Her mom would come in and inspect our rows of cookies cooling (instead of our mess), sample one and rave, making us beam, and then move to the sunroom to open mail and read or paint. Hours later after we’d ridden bikes in the rain and gotten an ice cream at Baskin-Robbins, we’d come in soaking wet and trailing water, the kitchen mess still there, and remarkably, still producing zero stress for anyone. I learned years later that her mother was an artist, and I can still picture her in that sunroom seated before her easel and stacks of mail.

I’m fairly certain I was the only one measuring me.

Sometimes I feel like a beautiful songbird who wants to sing, but I’ve taken the liberty of taping my beak shut, eliminating my voice so no one can judge it. As a child, in the privacy of our den, I blasted my favorite albums, singing into my tall tapered candle microphone Marilyn McCoo’s Wedding Bell Blues or Barbra Streisand’s Queen Bee — and every other song on the A Star is Born soundtrack. Years later, I found the nerve to try out for a singing role in my school’s Academy Awards production, and stood weak-kneed in Westminster’s chorale room before Mr. Spence, who patiently waited at his piano for my cue. I nodded and it started, the unremarkable audition from the shy, shaky singer, nothing resembling that sparkling performer I seem to have left at home. I wanted to explain and get a redo, but I left as soon as it was over. I didn’t get the singing part, but they gave me instead the part of presenter, decked out in fancy clothes announcing nominees into a microphone, not the substantive, courageous role I was after.

Years later I wanted to try out for an acapella group with some Atlanta Botanical Garden carolers I’d seen at Christmas time. They were amazing and for me, far outshone the holiday lights. I wanted to join them then and there, and it was all I could do to not sidle up beside them, blend in and start singing, but my family had moved on to see more lights, so I hustled to catch up. Still smitten, I found them online and signed up for an audition, only to cancel when my cold morphed into a sinus infection, killing my high notes and my courage to try again.

After college, having worked a few years in admin and marketing, I was itching for more, for something creative. I applied to The Portfolio Center, an advertising school which, true to its name, required a portfolio to get in so you could then develop a real one. I savored the hours I spent creating mock ads, and much to my surprise and delight, I got in. A few months later, juggling full-time school, a full-time job and the full-time work of caring for my aging parents, I was overwhelmed and needed to drop something. I chose school before giving myself enough time to hone what I’d later realize was a budding talent. If I’ve learned nothing else, I’ve learned this: Don’t cut out the fun stuff, the things that get you thinking, the stuff that brings you to life. You’ve got a lifetime to handle responsibilities, but it’s your job to infuse your life with life.

If money or time or circumstances were no object, what would you do? I asked my niece this question and her answer surprised me. It turns out she loves making furniture, and her boyfriend has given her tools to support this hobby, and also she’s found a course to learn more. I could hear her excitement as she came alive describing what she loves, but less so when I asked about her day job. This question can reveal telling things if you ask yourself, especially if you move in that direction at whatever pace you can muster.

Don’t cut out the fun stuff, the things that get you thinking, the stuff that brings you to life.

What if I’d kept writing ads or singing or taking more risks? What if I started now? Why have I allowed hesitation and trepidation to be my guides instead of fascination and exhilaration? I’ve taken personality and career tests to uncover what I might be naturally good at or with which careers my interests align, and the results haven’t propelled me in any one direction. A test isn’t going to fire me up, but letting my curiosity wander and refusing to let anyone, myself included, stamp it out or push me back in between those damn lines, very well might. That time my friend’s mom spent in her sunroom, quietly reading or sitting or creating art, is sacred. It’s not finding the time, it’s making the time to slow down so you can notice new paths to explore.

Why have I allowed hesitation and trepidation to be my guides instead of fascination and exhilaration?

I haven’t spent nearly enough time looking and listening and far too much of it coloring inside the lines, creating very little. I do still have a couple of clay pots I made in high school, and one of them cracked in the kiln from that day I forgot to wrap it. Other than it’s ruddy glaze, I think that mistake is what I love best. I also made a beautifully shaped coil pot, and glazed it a cream color, painting its rim a pretty blue. Later I added Sharpie chevrons around its edge, a junior high school choice I wouldn’t repeat today, but I love that 8th grade girl trying something, marker chevrons and all.

It’s not finding, it’s making the time to slow down and notice new paths to explore.

It’s not the mess, it’s the exploration. It’s not the mistake of coloring outside the lines, but trying to play with colors in the first place, and seeing what happens. Because something always happens. We can either encourage it or we can suppress it, but if we accept the rules as the Rule, we can’t expect to discover something new about ourselves, our world and even more important, what we might be capable of. If the mess distracts or derails us, we are completely missing the point. Lift the brakes, sing, dance, paint, let it out. Because that song? It’s gonna be sweet. 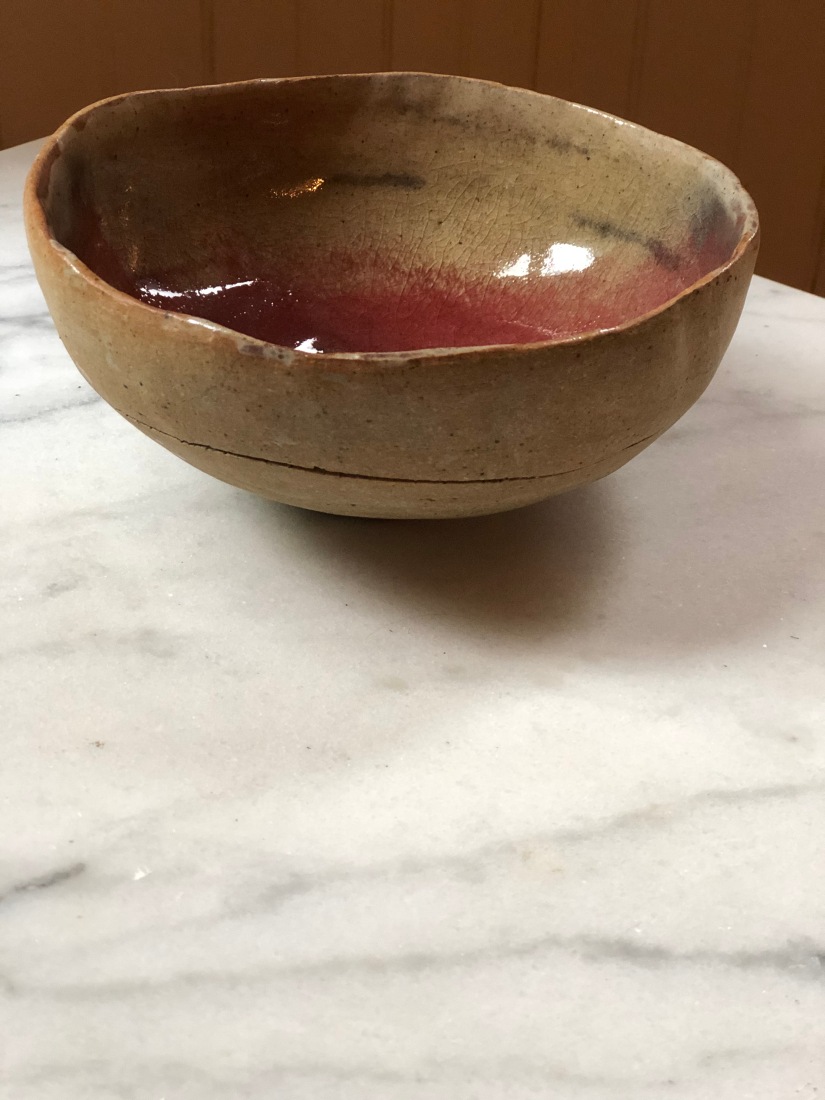